Southeast Architectural Solutions is proud to add Armoured One to our line up of quality manufacturers. I am, however somber at the need for their product.

Armoured One is dedicated to one mission, “making schools, colleges, and universities safer against major attacks and shootings.”

The Armoured One team is made up of SWAT Team members, elite Military personnel and Federal Agents. They study the history of attacks on schools and use their findings to create new products, training and preparedness plans to help school administrations be proactive against attacks.

I will be covering Armoured One’s active shooter training and security assessment services in another post. Feel free to follow the links for more information about those services now.

Regardless of politics, reasons or excuses we can all agree that the number of active shooter incidences in our schools is incomprehensible.

While this fix is not an end all solution and doesn’t begin to repair what is wrong in our country I can certainly see how these steps can help to keep our students safe.

These design attributes are appearing on plans for new schools all over the country. What about existing schools? Main entrances to most schools are largely made up of glass. Large double glass doors often with glass sidelights on each side. 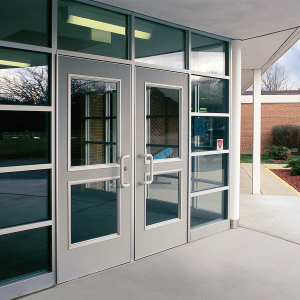 Investigations into the Columbine, Sandy Hook and Stoneman Douglas attacks reveal that the shooter accessed the school by shooting out glass and walking right through the opening.

There are products on the market now that address this vulnerability. Armoured One has security glass as well as an attack resistant film that CAN BE INSTALLED ON EXISTING GLASS.

Do your research and be aware there are many levels of security glass and film. A typical 3m or 9m film will not provide maximum protection.

Armoured One manufacturers a 21m film and has the only shooter attack certified film on the market. Take a look at this video comparing the typical safety film versus the Armored One Base Security Film.

Please contact me for more information on how to get this shooter, bomb and attack resistant security glass film installed on existing glass in your communities’ schools.